There are some stories in which the protagonist comes and conquers the world. Honestly, there is nothing very great about such stories. The real champions are shaped due to their circumstances. They face numerous challenges every single day. They overcome these hurdles to eventually reach their destiny. Battered and bruised, but happy.

Today, we are talking about one such champion. This discus thrower has come a long way. After numerous struggles and an equal number of stunning performances, Seema Punia is making her mark. What makes her stand out? What makes her an inspiration? Let’s find out! 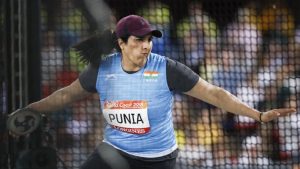 Born as Seema Antil in a small village called Khewda in Sonipat district of Haryana, Seema always knew she was meant for athletics. Her sporting family background also played a key role in this decision. Both her brothers, Amitpal and Ananadpan, are into sports. Amit is a hockey player and Anand is a wrestler.

When she was 11 years old, Seema started her sporting career as a hurdler and a long-jumper. Later she decided to try discus throw and realised how good she was at it. Her talent was visible at several inter-state meets.

In college, she won the National Championship with a throw of 57.30 metres. Soon, she started winning senior-level championships as well. Seema made the entire country proud by winning the silver medal at the 2006 Melbourne Commonwealth Games. She also won the bronze at the 2010 Delhi Commonwealth Games.

Seema found her life partner in her coach, Ankush Punia. Ankush, a resident of Meerut, Uttar Pradesh, is a former discus thrower. He represented the country in the 2004 Athens Olympics. The couple tied the knot in February 2011 in Sonipat, Haryana. Ankush played a crucial role in Seema’s career. He helped her improve her techniques tremendously. 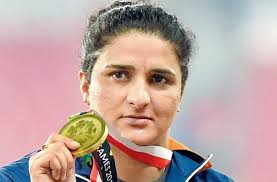 Seema was embroiled in doping controversies twice in her career. The first time was in the year 2000. She tested positive for pseudoephedrine and ended by losing the gold she won at the 2000 World Junior Championships. Seema has simply taken medicine for her cold and had no idea that it contained the banned substance. She received a warning from the Athletics Federation of India (AFI) as it was an honest mistake.

Her second encounter with doping gained a lot of media attention as she did not participate in the 2006 Asian Games. Though she was later cleared of all charges, Seema cited her sensitive frame of mind due to her father’s illness and lack of practice as reasons for not participating.

“Looking at my present performance during training and the circumstances, I am not in a position to give a good performance in the Asian Games. Hence, I request you to grant me permission to skip the Games,” she wrote in a letter to the AFI.

AFI had cleared up all doping charges against Seema and after the hearing panel declared her innocent.

Seema has her fair share of struggles due to injuries. In fact, she couldn’t participate in the 2010 Asian Games due to her knee injury.  In order to improve her strength, she completely changed her training. Instead of just practising discus throw, she worked on increasing her core strength through weightlifting. It also helped her strengthen her legs.

“My training has changed because my Body Mass Index (BMI) has also changed in the last two years. I can’t reveal everything, but would say that the number of throws (during training) has gone down and focus is more on fitness,” Seema told the Quint. 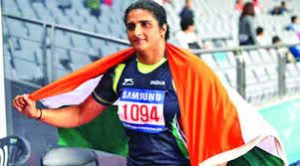 Seema was removed from the National Camp in 2011 and it turned out to be the lowest point in her career. Already handling multiple problems, Seema had to pay for all her sporting expenses from her own pockets. Fortunately, she found solid support from her husband and coach Ankush.

“I was thrown out of national camp without any valid reason in 2011. After that, I have been spending my own money on training, equipment and diet. It was not possible for us to train without financial help and that’s why we took money from different sources including private lenders at a higher rate of interest,” she told the DNA.

The expenses were in lakhs. Her basic footwear cost her almost 10 thousand rupees. Due to the rigorous nature of her sports, there was a lot of wear and tear. There used to be days when he had to replace her gear daily. After she received some cash prizes, she could finally clear all her debt.

“At one point of time before 2010 CWG, I had no specialised throwing shoes to wear. But when I got money for winning CWG medal, I bought many pairs of shoes in one go after repaying money to banks and lenders,” Seema continued. 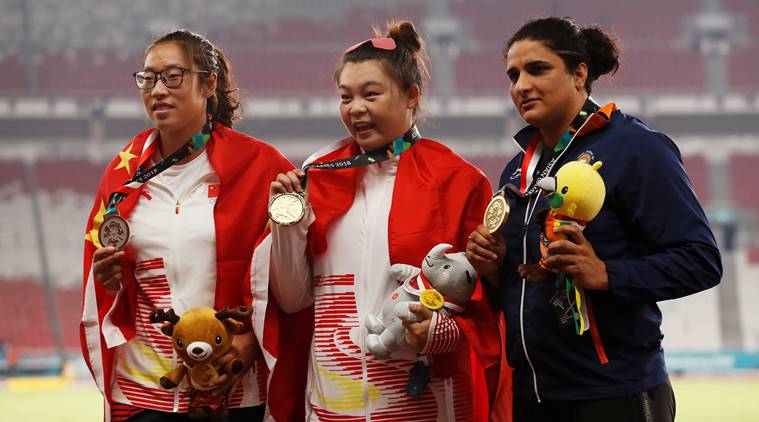 After a brilliant start, Seema’s career couldn’t really take off to her full potential. However, that changed from 2014. The Incheon Asian Games brought about a new era of her career. Her stunning throw of 61.03m enabled her to clinch the gold. She inaugurated the athletic medals at the Asiads. After missing out on two Asiads, the gold was truly golden for Seema. A long-cherished dream was finally fulfilled.

“It was a very emotional moment for me. All the pain and sacrifices came to my mind when I was on the podium,” she told the Indian Express after the games.

“This medal means a lot because this was my first Asian Games. I missed the two previous Games partly because of a doping allegation in 2006 in which I was innocent, and also due to injury,” she continued. “Finally, I have managed to win something big. Hopefully, this will end the gloom that has dogged my career.”

The 2018 edition of the games was particularly challenging for Seema, as she was participating without a coach. She had to forgo her favourite discus as well as it was quite battered. However, she was perhaps in her best form and nothing could stop her from getting that podium finish!

“We hoping to see her winning gold this time at Gold Coast as she is in the best form of her career,” said her husband Ankush in an interview with the Hindustan Times. He was very excited to see his beloved wife and ‘bahu’ of Uttar Pradesh return back with a medal.

Life hasn’t been easy for Seema. Though extremely talented, she has had to face one challenge after another. She could have just given after the doping controversy, but she didn’t. She believed in herself and maintained her integrity. When she was struggling with injuries, she was patient and work hard. Now, the results are visible to everyone!

It is so heart-warming to see a 35-year old sportswoman keep a positive spirit and inspiring millions. Seema has already set her sights on her next targets- Asian Championship, World Championship and the 2020 Olympics.

“This is not my last big event. Age is just a number. In the discus throw, the strength only gets better with age and experience. I feel the real career will begin now”, she told the Quint.

Back with a bang, Seema is here to create a splash. We can’t wait to see how she captures the sporting world again.