Sangita Phogat (Sangeeta Phogat) is an Indian wrestler who competes in the 59 kg freestyle category. She belongs to the famed wrestling family, ‘the Phogats’. She is a silver medalist at the National Championships. 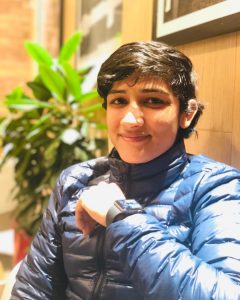 PHOGAT SISTERS – When one hears the name, Wrestling is the word that instantly strikes the mind. And why not? After the 2016 blockbuster by the name Dangal, the term ‘Phogat’ and more precisely, ‘Phogat Sisters’ has become a household name.

For the better part of her life, Sangita (or Sangeeta) Phogat lived in the silhouette of her glorious siblings. Given that she is the youngest, she not only has big expectations but having high achieving sisters does lead to inevitable comparisons. Three of her eldest sisters are Olympians and two World Champions. Her siblings have a total of 9 Asian Championship medals and all of them are National Champs.

Unfortunately, Sangita Phogat is not one of them, yet. At 23, she is just entering the sport. Silver at the 2017 national games is the best she has to show for the time being.

But that’s not to say she is the least talented. In fact, it could be just the opposite of that. She has started showing signs of brilliance and fighting spirit that was so much a trademark of Geeta Phogat, her eldest sister.

A Star in Making

For starters, take one of the Pro Wrestling League matches when Sangita Phogat was representing Delhi Sultans. She was facing a much senior Vanesa Kaladzinskaya of UP Dangal. More importantly, apart from she had tons of additional experience, she was a reigning world champion. Vanesa was also an Olympian, having represented her country at the 2012 London Olympics. However, none of that mattered.

Sangita played one of her best matches in the contest, defeating the 25-year-old Belarusian wrestler by 7-4.

Sangita Phogat started the first round by conceding a 0-4 advantage to her opponent. However, from then on, Sangita held her composure. She was cautious while defending and ferocious in the attack. As a result, she went on to scalp all the 7 points on the trot to win the match.

Among those points, the point from a slick leg-sweep takedown was the highlight of Sangita’s exuberant play.

Such was the impact of her win that praises were showered immediately after the match, most notably from the women she looks up to – Geeta and Vinesh. 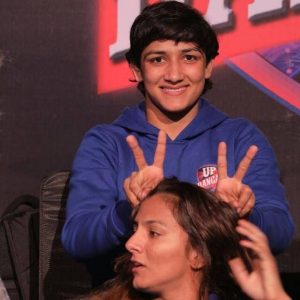 Sangita Phogat and Geeta Phogat after the PWL match

In spite of the two being a part of Vanesa’s team UP Dangals, Vinesh expressed her confusion, as they did not know whom to follow, their teammate or their younger sister. Sangita too expressed her happiness of defeating a world champion. She also added that the victory would ‘motivate me to do well at the Asian Games.’ 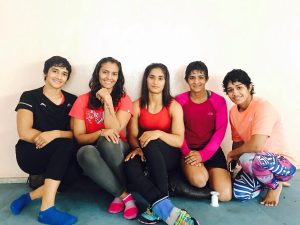 Sangita Phogat was born to the wrestling maestro and Dronacharya awardee, Mahavir Singh Phogat and Daya Shobha Kaur on 5th March 1998 in Balali, Haryana. She has 4 siblings, 3 elder sisters (Geeta, Babita, and Ritu) and a younger brother named Dushyant. Sangita also has two cousin sisters from her uncle, Vinesh Phogat and Priyanka Phogat.

Mahavir Phogat, a senior Olympic coach, trains all the six Phogats in their hometown in the Bhiwani district.

Last but not least, Ritu is a national champion.

All the 6 sisters are popularly known as the ‘Phogat Sisters’. 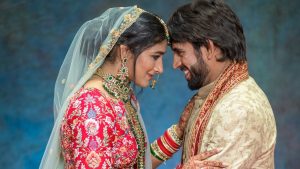 Sangeeta Phogat tied the knot with wrestler Bajrang Punia on November 25.At their wedding, the newlyweds took eight ‘pheras’. The eight ‘phera’ was dedicated to the girl child as they vowed for the ‘Beti Bachao Beti Padhao’—a government campaign. Her sisters, Geeta and Babita, also took eight ‘pheras’ during their wedding and the same tradition was followed in Sangeeta’s wedding.