When shooters pick up the rifle to aim, the only thing that matters is their target. Everything else fades away. As the idea of winning loads in their mind, instinct will pull the trigger. Whether their years of waking up, dedicating extra hours for training, and sacrificing your favourite foods was worth it is decided at this moment. And it is precisely for this exact moment that the 19-year-old Ayushi Podder trains for!

Every time Ayushi aims, her target is more than the ‘Bullseye’ shot. She aims for a Podium Finish! Every time she pulls her finger against the trigger, she sends the bullet towards her dream of an Olympic medal hanging around her neck with the tricoloured flag unfurling above her.

Aayushi is a junior rifle shooter and the latest young shooting sensation from India to rise in the sport following Manu Bhaker, Gayathri Nithyanadam, Mehuli Ghosh and others. Born on 23rd October 2000, Aayushi hails from Sheoraphuli, Hooghly of West Bengal. 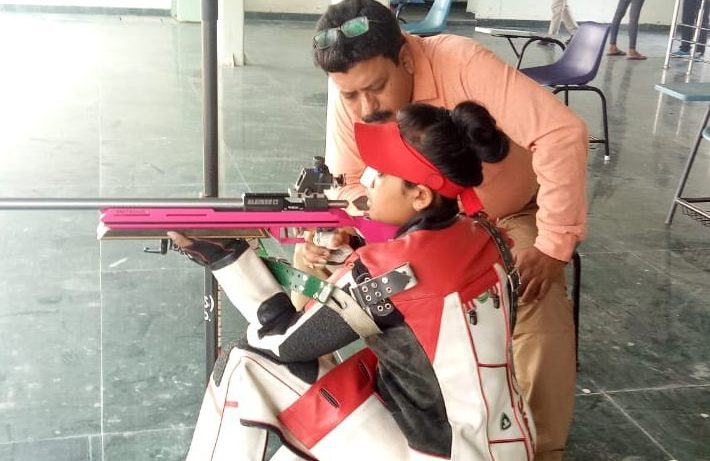 Aayushi’s passion and talent for shooting come from her father Pankaj Podder, who himself is a former Indian shooter and an International Shooting Sport Federation (ISSF) licensed certified coach.

Aayushi was completely devoted to studies in her schooling days at the Techno Indian Public School. Surprisingly, despite being exposed to the sport from an early age, she had little to no interest in shooting.

When Aayushi was seven, she had a portfolio done with the dream to become a model or an actress. She also took dancing lessons in Classical Odisha style and participated in various school events.

At this period of her time, Pankaj used to travel to various states to compete in matches. Aayushi had never imagined that one day she would follow his footsteps. Being extremely good in academics, Aayushi wished to study MBBS when she grew up.

Things took a turn pretty soon when her father asked her to give shooting a try. Pankaj admitted about his dream of seeing his daughter follow his footsteps. “When my daughter was just 5 years old, I thought to turn her into a shooting Olympic medalist,” he says.

She soon started to train for her father’s sake. And within just seven days of holding the air rifle, Ayushi was already a state champion!

“It was my first competition, and I was already a champion!” she says, excitement clearly audible in her sound. Her first big win prompted Junior Podder to take up shooting.

And with her father’s solid backing, there was no looking back. As time flew by, Aayushi immersed herself into the sport and found herself a new passion to bleed for. Seeing her grit and passion for shooting, her school principal and teachers also started to offer their support as she began her newest journey.

But to excel in the discipline of shooting, an athlete needs maximum focus. For Ayushi, focus and concentration came with ease. This was the reason why she was able to achieve good grades. “I’m good at academics. For that concentration and focus are very important, and these two skills helped in my shooting a lot.”

Ayushi also has realised the value of perfection, both in sport and her life. In her early days of training, her father once said to her: “Ayushi only can shoot with the perfect sight picture”. The words have helped her a lot in the international arena. They have been grafted in her mind. “Perfection matters,” she tells.

After being the state champion, Ayushi won the pre-national championship in youth junior-senior in the following month. Within a year, Aayushi had sealed her place to train in the Indian squad camp. She soon made it to the Asian air gun team and in the next year achieved her 1st international gold medal at ISSF Junior World Cup 2016, Suhl, Germany.

Being an athlete in India is never as easy. And Ayushi is not an exception. The young shooter has many forgettable stories to tell from her visits to different places for tournaments. One such story occurred on her return from the Asian Junior Championship in Doha, Qatar.

Ayushi and her team had landed at 5 AM in New Delhi from a long and tiring trip. It is at this moment when she is informed that she has an 11 AM slot to compete in the 50 meters Rifle 3 Positions event in the All India Inter-University Championship. Fighting hunger and sleep, the young shooter participated in the event and went on to win bronze.

When she mentioned this incident, Ayushi opened up about it without any regret. She does not blame her hunger or lack of sleep for her defeat. Nor does she blame the unorganised planning by organisers.

Today, Aayushi laughs it off. However, this is just another addition to a long list of organisational and structural problems athletes have been and are still facing in the sports eco-system in India.

During the World Championship in Changwon, Korea, Ayushi had to face a gap of eight days from her arrival to matchday. She was unable to practice for these eight days due to scheduling of other matches. Further, Ayushi’s rifle was old. This gave her a horrible experience during the competition.

To make matters worse, Ayushi’s father and her personal coach was unable to travel with her due to budget issues. This is another problem faced by athletes in India today. Athletes face money crunches to buy equipment, travel to training, for a healthy diet and much more.

Balance between shooting and education

Despite juggling between academics and shooting training and globe-trotting for events, Aayushi’s grade in school never fell. After high school graduation, she chose to pursue a course in Humanities, allowing her time to focus on studies as well as shooting.

Currently, Ayushi Podder is pursuing under-graduation in Public Administration from Punjab University at the same time while training and attending competitions. However, Ayushi believes that it would not have been possible without support from her college and their administration.

Ayushi does not have an attendance bar due to her admission in Sports quota. She is able to train all year round and only goes to write exams. Sometimes, if competitions or selections clash with her exams, the college schedules special dates for her to attempt the exam.

A day in the life of Ayushi Podder

Just like her father, Ayushi travels a lot. Throughout the year, Ayushi participates in at least ten domestic competitions. Then there are selection trials and around two to three international competitions in a year.  Excluding her travels for various competitions, she regularly travels to Delhi for training at the Dr Karni Shooting range, as it is the only range where she can train for the 50 meters categories.

Ayushi also needs to travel to Chandigarh to attend university regularly. In between travelling for training, competitions and college, she is hardly able to stay at her home.

A usual day for this young shooter from West Bengal begins at 5.30 AM. She wakes up, freshens up and has a light warm-up. By 7.30 AM, Aayushi is on the breakfast table. Post breakfast, she leaves for training.

At the academy, she spends the next five to six hours daily as she trains with other shooters under her personal coach and father. Aayushi and her father have lunch at the range itself. Ayushi makes it a priority to consume home food, which has a lot of protein. She also drinks green coconut water, which keeps her energised during training as well as competitions.

Aayushi admits that she was able to shoot her personal best only because of the new imported rifle from Switzerland, the Bleiker Lady Challenger 2, costing seven lakh rupees. Currently, Ayushi is sponsored by Sony Pictures Network India (SPNI) and supported by Lakshay Sports.

Post-training, she returns home and takes a break. Aayushi then goes on for physical at 5.30 in the evening. Her training hours are reduced the day before competitions.

Ayushi with her father Pankaj Podder and mother Tanushree Podder

Being the sole child in her family, Aayushi is loved a lot by her parents as well as grandparents. Her family has played an important role in her way to success. “This family is my life support system. They provide me with strength and motivate me in all the possible ways,”  the budding star admits.

Her father, Pankaj Podder, is a former Indian shooter and an ISSF certified licensed coach.  Pankaj entered the sport in 1984 and became a professional shooter in 1988. He trained under Asian Games shooter Maya Roy at the Serampur Rifle Club. After competing in various Nationals, he joined the shooting club as a coach and started to train his daughter.

Despite his shift into coaching, Pankaj still continues to shoot in various tournaments and works at Indian Railways, West Bengal. It’s incredible that he is able to find time to focus and train his daughter amidst his other work.

While her father plays an essential role in her training, Ayushi’s mother, Tanushree Podder, is her source of mental strength. In her father’s absence, Ayushi’s mother travels to tournaments with her. She is her constant source of strength, support and motivation.

Role models play an important role in every person’s life. We follow our role models and look to base ourselves with them. Similarly, Ayushi looks up to retired Indian shooter and former World and Olympic Gold medalist Abhinav Bindra.

Among female shooters, Ayushi wants to model herself to Asian Games shooter and National champion Anjum Moudgil. Among her coaches, Deepali Deshpande is her favourite Indian coach due to her similarity in coaching style with her father. 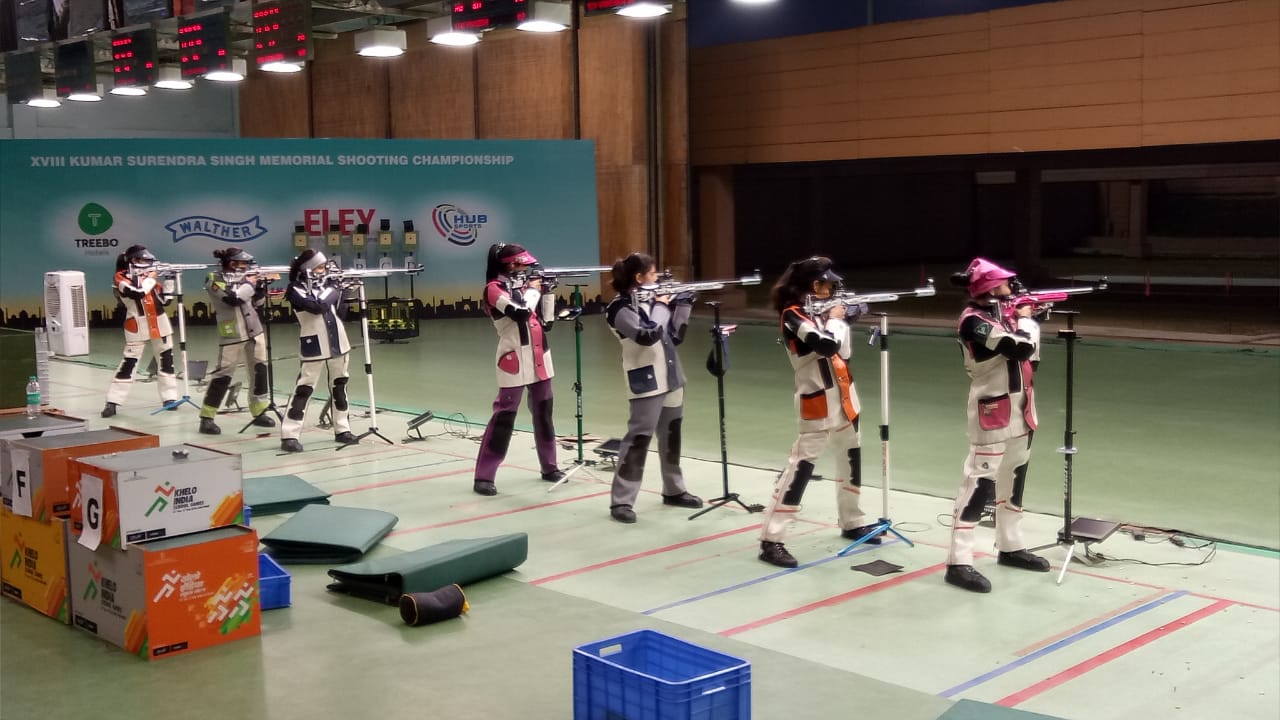 Ayushi Podder’s long term goal is to qualify for the 2024 Olympics, France. However, at the moment Ayushi’s focus remains on qualifying in the Asian Games, Commonwealth Games and Shooting World Cups. The young athlete knows the importance of these short term goals, which are also touchpoints to qualify and earn quota for her ticket to Paris in 2024. The journey began with the 63rd National Championship where she aims to make her way into the senior team.

Except for the 1904 and 1928 Olympics, sports shooting has been a part of the quadrennial sporting event since its induction in 1896. Currently, there are a total of 15 shooting events in three disciplines, namely- Pistol, Rifle and Shotgun. Under Pistol, there is the 10 meters Air Pistol event, 25 meters Pistol event and the 25 meters Rapid Fire Pistol event. The category in which Ayushi competes is the Rifle, under which there is the 10 meters Air Rifle and the 50 meters Rifle 3 Positions event. For shotguns, there are two categories- the Trap event and the Skeet event.

Many young athletes quit playing in various stages of their career due to lack of confidence, lack of patience or any other reasons. However, Ayushi Podder strongly believes that one should not quit, no matter which sport, what age and whatever the situation. Athletes need to keep themselves motivated and need to be patient at every moment of life so that one day they will shine like a star.