Shreyas Iyer might just be the next big thing in Indian cricket. After all, he seems to have been successful on all fronts. From graduating from Mumbai’s legendary cricket institution to captaining the Delhi Capitals, the 26-year-old’s growth has been a rapid one.

In fact, it is under his stewardship that the Capital team managed to make it to the Indian Premier League‘s playoffs (in 2019) for the first time after 7 long years. The year 2020, the 13th season of IPL, was the best one so far for Shreyas and DC, yet an unlucky one. The team reached the finals of IPL 2020 but lost the deciding match to champions Mumbai Indians by 5 wickets at the Dubai International Stadium.

No wonder Iyer is considered a captain material for the future team India. He also has a unique blend of a natural aggressive game and great technique. Let’s get to know about how he managed to achieve so much in so little time… 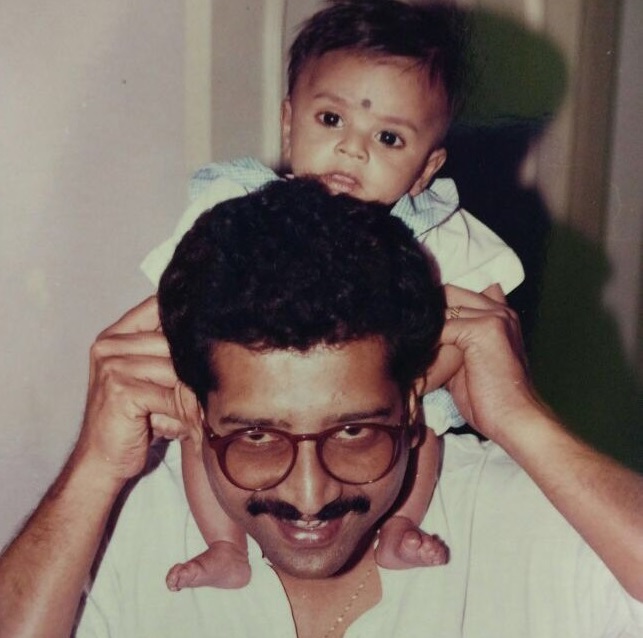 There’s a touch of middle-class realism to Shreyas Iyer’s tale! Shreyas Iyer was born in Mumbai to Santosh Iyer and Rohini Iyer on the 6th of December, 1994. Iyer’s father noticed his cricketing talent and helped him nurture it. Santosh, a businessman who used to work from home at the time, was instrumental in Shreyas choosing cricket over football.

Pravin Amre, a student of the legendary coach Ramakant Achrekar, spotted Iyer at the heart of Mumbai’s local cricket hub- Shivaji Park Gymkhana at the age of 12. Amre noticed a boy hardly even in his teenage years, was timing strokes of the front and back foot twice his height and nailing cover drives and pulls. 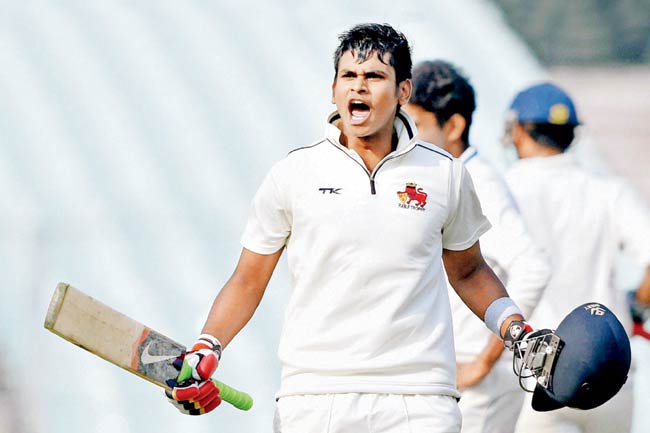 Iyer’s teammates at the age-group levels compared him to Virender Sehwag. After early education, Iyer went on to complete his graduation from Podar College in Mumbai. He represented the college team and lifted various trophies. 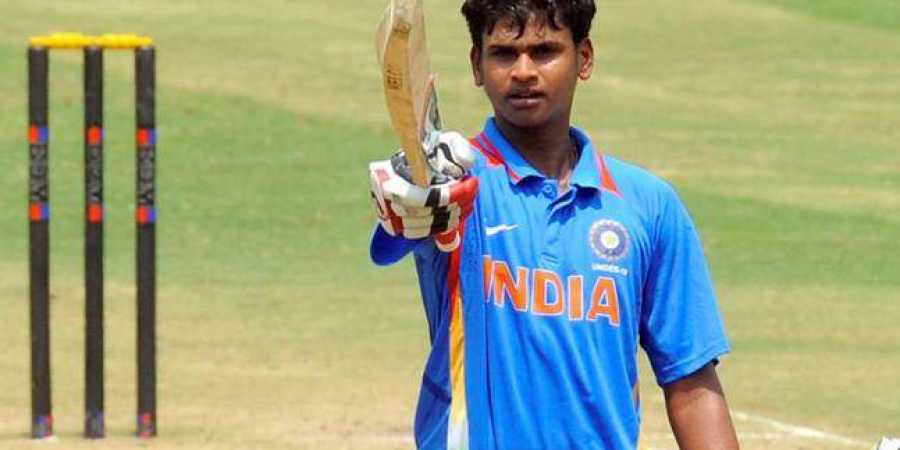 A 20-year-old Iyer joined Clifton Village Cricket Club of the Clifton University in Nottingham and was the youngest player on the side. Ironically, Iyer had not played a single first-class match. All he had was the 67-ball 109 vs Australia U-19 and three matches in the U-19 Cricket World Cup, in which he had scored 161 runs.

Iyer was living alone in a foreign country with completely different weather conditions. However, he did not disappoint. Iyer played 3 games scoring 297 runs at an average of 99. Furthermore, he broke the team’s record with the highest score of 171. 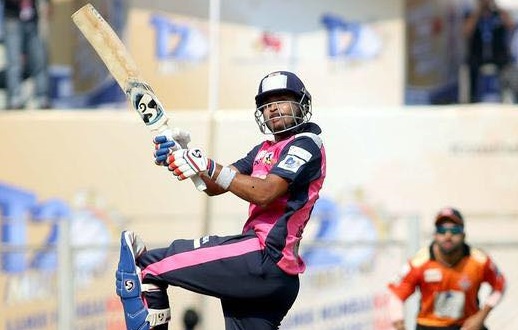 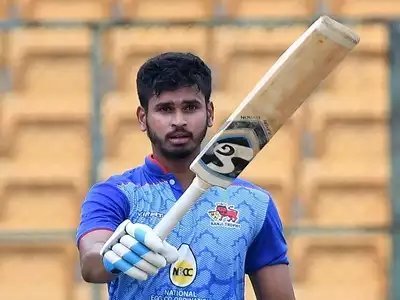 Shreyas Iyer returned to India and joined the Mumbai Ranji team in November 2014. He made his List-A debut in the 2014-15 Vijay Hazare Trophy. 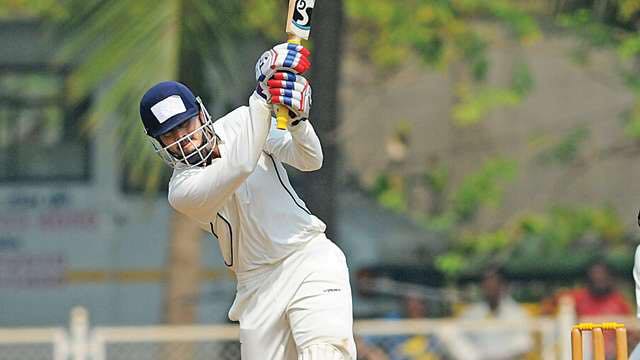 Following his good performances in the tournament, Iyer made his debut in Ranji Trophy next month. He continued growing as he scored 809 runs in 10 matches at an average of 50.56 and a high score of 153.

He finished as the highest scorer for Mumbai and the 6th highest scorer of the Ranji season. His vital contribution helped Mumbai reach the quarterfinals of Vijay Hazare and the semifinals in the Ranji. 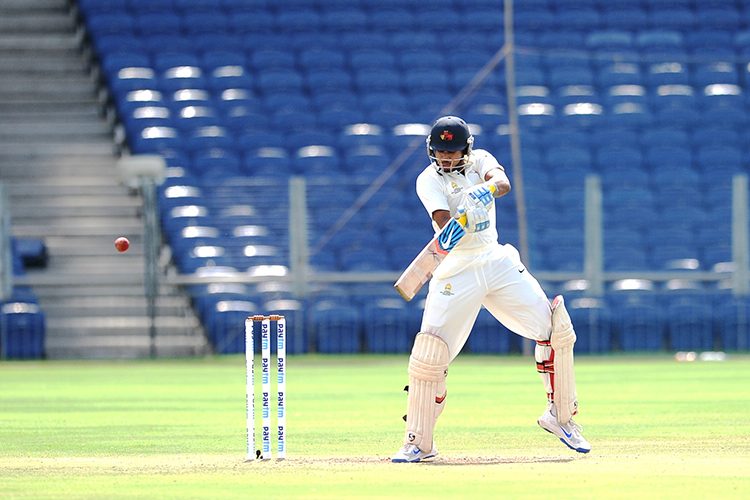 In the following season, Iyer performed even better, He scored 1,321 runs in the 2015-16 Ranji season. Iyer hit 4 centuries and 7 half-centuries with an average of 73,39. He ended the season as the top-scorer and became the second player to score over 1,300 runs in a Ranji season.

In the same season, Iyer played crucial innings of 95 for Mumbai against the Railways. After the match, Rohit Sharma praised him.

“I had heard from people in our (Mumbai) dressing room that he’s been in good nick. I’m glad about the way he is batting. I was enjoying it from the other end. He reminded me of Sehwag a little bit because that’s how he used to bat. He batted pretty well. Whatever he’s been doing of late, it’s pretty good to see that,” the Hitman said. 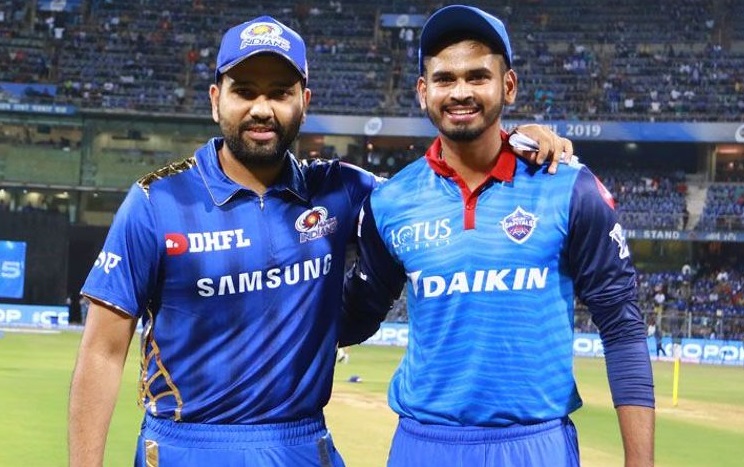 Iyer continued to perform consistently in domestic cricket. The 2016-17 Ranji season saw him score 725 runs at an average of 42.64, he scored 2 centuries and 2 half-centuries. His highest first-class score came while playing for Mumbai against Australia. Iyer played an unbeaten inning of 202 in the 3-day practice test.

By September 2018, Iyer was named the vice-captain of the Mumbai Vijay Hazare tournament. Leading as an example, Iyer scored 373 runs and finished as the top scorer as Mumbai lifted the title for the third time.

The young batsman continued his good form in the 2018-19 Syed Mushtaq Ali Trophy. He scored 147 and it became the highest total scored by an Indian in a T20 match. 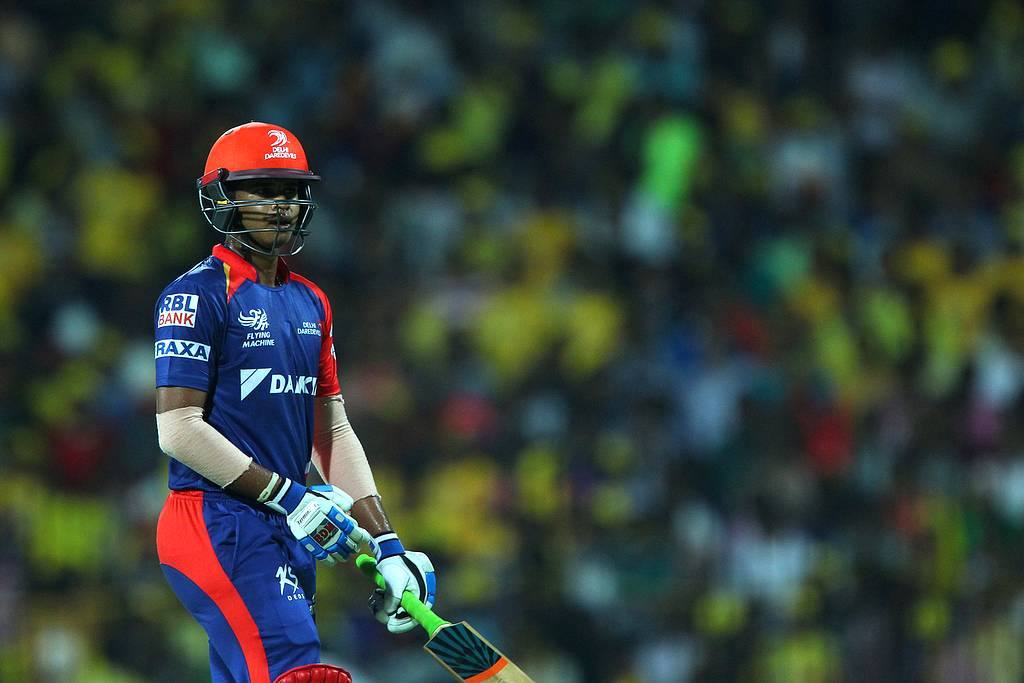 Iyer’s performances in the 2014-15 domestic season caught eyes, including that of Indian Premier League teams. In February 2015, Delhi Daredevils purchased him for a whooping ₹2.6 crores. The young batsman became the highest-earning uncapped player of IPL 8.

Shreyas was a light of hope in a dull season for DD. Iyer finished the tournament with 439 runs in 14 matches at an average of 33.76 and a strike rate of 128.36. He was also announced as the emerging player of the year.

However, Iyer was not able to build on his promises in the next IPL. Iyer player only 6 matches, scoring a paltry 30 runs with a disappointing average of 5. Delhi continued disappointing as they failed to qualify for the playoffs.

Shreyas Iyer hit back with strong performances in 2017 leading him to be appointed as the captain in the 2018 IPL season. At 23 years and 142 days, Iyer became the youngest captain in the Delhi Daredevils history.

Debuting as a captain against the Kolkata Knight Riders, Iyer smashed an unbeaten knock of 93 in just 40 balls as DD won their match. Shreyas hit 10 maximums on his way to a third consecutive half-century. The next season, Delhi Daredevils were rebranded to Delhi Capitals with the hope to change fortunes. 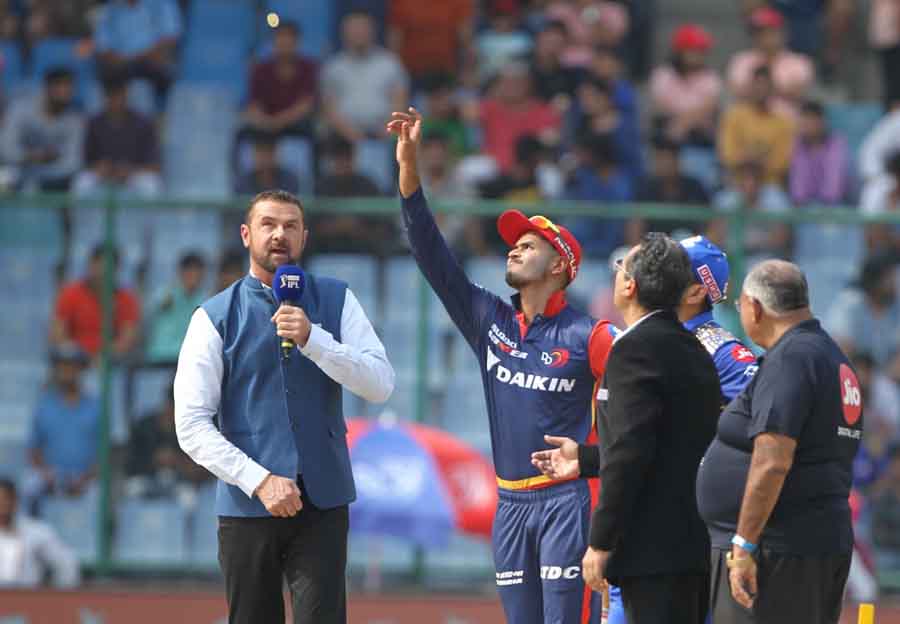 The ownership decided to retain Shreyas Iyer and his army of young blood with a mixture of experience. Iyer led the Delhi Capitals to the playoffs after seven years, where their dream run ended when DC lost to eventual runners-up CSK. With the bat at number 3, Iyer had his best IPL season, as he managed to score 463 runs in sixteen matches at an average of 30.86 and strike rate of 119.94.

In the year 2020, Shreyas led his side to the finals of IPL, but unfortunately, the team lost to Mumbai Indians by 5 wickets at Dubai International Stadium.

Shreyas couldn’t participate in the 14th season of IPL 2021 because of a shoulder injury, which he got during fielding at covers in India vs England series 2021. Consequently, Rishabh Pant was given the responsibility to lead the side in absence of Shreyas Iyer.

Shreyas Iyer’s feisty playing style along with his records in both the Syed Mushtaq Ali Trophy as well as the IPL caught selectors’ eyes. In October 2017, Iyer received his India National Cricket team callup for the T20 series against New Zealand.

On his T20I debut on the 1st of November 2017, Iyer did not get a chance to bat as Indian openers Shikar Dhawan and Rohit Sharma led India to a 53-run victory. In the next match, Iyer scored 23 runs off 21 balls as he steadied the ship with Virat Kohli after the Indian openers lost their wickets early.

In the decider of the series, Iyer failed to perform as he scored 6 runs before getting caught and bowled in an 8-over-per-side match.

However, Indian bowlers were able to control the Kiwis as the Men in Blue picked up the trophy. Shreyas Iyer’s most notable T20 international performance for the Men in Blue came more recently. Iyer scored his first T20I half-century in the Bangladesh tour of India in November 2019. India won the match by 30 runs.

The Mumbaikar made his ODI debut against Sri Lanka on 10 November 2017. With not the best performances in the T20 matches, a nervous Iyer came to bat at number 3 with Dhawan gone for a duck. 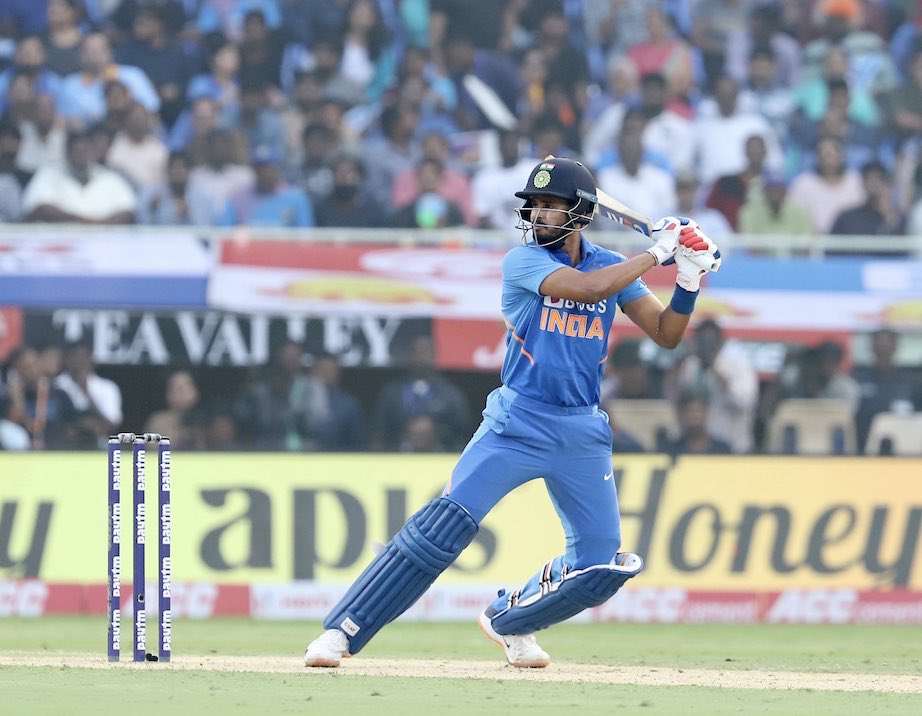 On a difficult pitch at Dharmashala Iyer scored just 9 runs in 27 balls as both he and the whole Indian batting lineup suffered. Determined to perform better, Iyer put his bad debut behind him in the second ODI as he scored two half-centuries in the next two matches.

He (88 and 65) in the next matches as India came back from 1-0 down to win the series 2-1. After an average performance on the tour of South Africa, Iyer was dropped from ODIs for almost a year as the focus turned to the 2019 ICC Cricket World Cup.

Post-World Cup, the Indian team wanted to solve the number 4 issue and recalled Iyer to the ODI squad for the tour of the United States and the West Indies. On his return, Iyer scored 71 off 68 balls and 65 off 65 balls on the number 5 position.

In the first ODI of the West Indies tour of India at Chennai, Shreyas Iyer was finally given the chance to play in the number 4 position. Iyer immediately showed signs of a perfect middle-order batsman as he steadied the Indian innings after Virat Kohli’s departure at 2-25. He scored 70 in 88 balls and helped India to post a target of 287.

In the second ODI at Visakhapatnam on 18 December 2019, Iyer scored 53 in 32 balls at a strike rate of 165.62 as India leveled the series. In the same match, Iyer scored 31 runs in a single over, becoming the highest score in an over by an Indian in ODIs.

Shreyas Iyer has not made a single Test appearance for India yet. 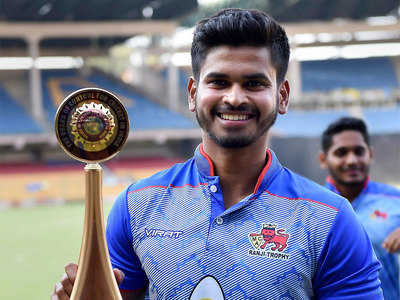 Shreyas Iyer scored his maiden century for India during the 1st ODI of the 3 match series against New Zealand at the Seddon Park. 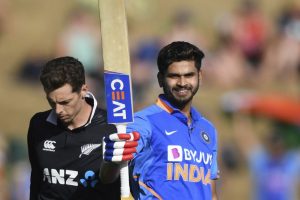 Shreyas has scored 5 centuries in List A cricket and 12 centuries in First-Class cricket. Iyer’s highest career and the first-class score was 202* against Australia. His highest score in List A Cricket came against Gujarat in the West Zone of Vijay Hazare Trophy.

Shreyas Iyer was born in the Tamil Brahmin family on December 6, 1994, in Mumbai. His father’s name is Santosh who works as a businessman and his mother Rohini is a homemaker. 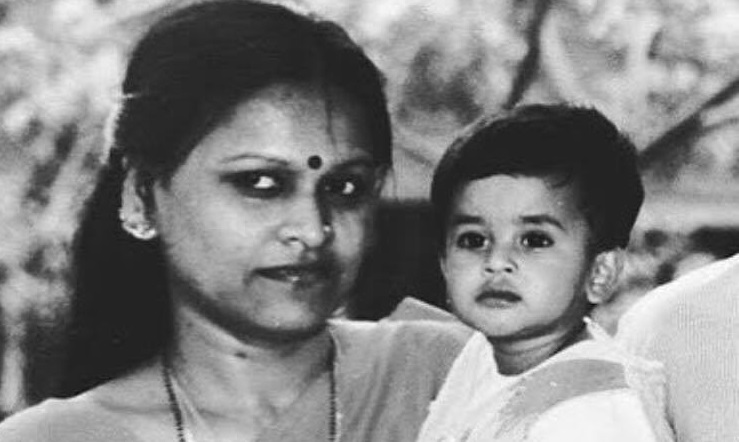 He also has one sister. Shreyas completed his schooling at Don Bosco High School and he later enrolled in Podar College in Mumbai. 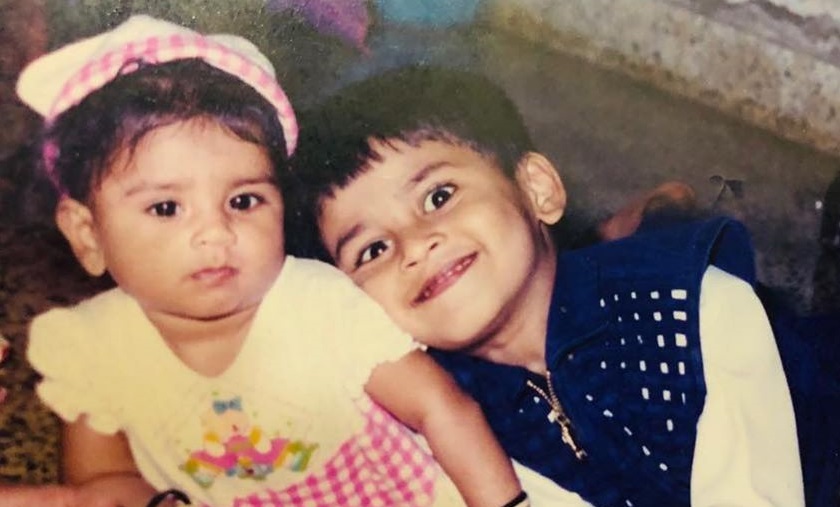 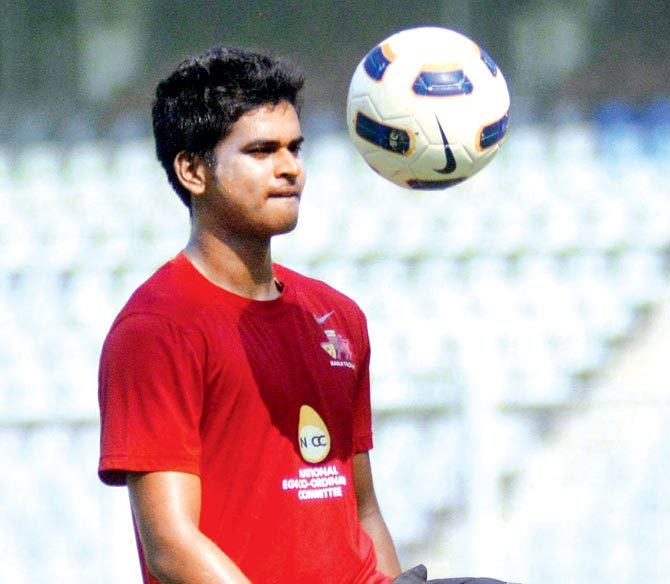